In the 1960’s, Polaroid launched its Swinger. Bart, family and friends enjoyed the instant quality of the camera. But it wasn’t until he purchased the Pentax Spotmatic that Bart sensed he was taking his interests to another level. The Spotmatic was the first in a series of SLR (single lens reflex) cameras that became available to American consumers, giving the user the ability to adjust shutter speeds and lens opening to produce optimal depth of field or image sharpness.

This is the camera that focused Bart’s interest in photography and helped him get into the Pratt Institute. Based in Brooklyn, Pratt was a local school that gave Bart the opportunity to take an interest and turn it into a money-making career. Bart looks back at his years at Pratt thankful that the post-secondary school was just a convenient commute from his childhood home. 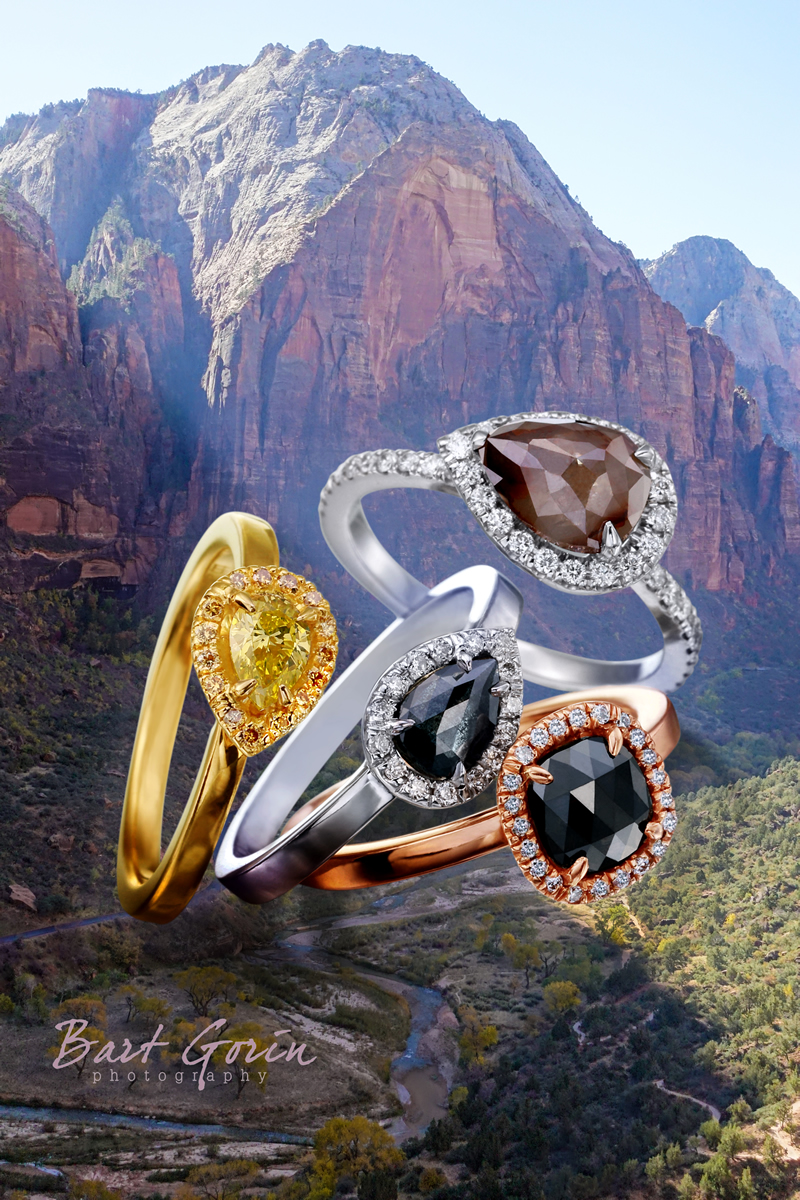 “The first year at Pratt was the best and biggest surprise,” says Bart. “It is called Foundation year, no work in your major. Everyone, no matter what their path, would take the same courses together and learned about 2D and 3D design, color, drawing and art history. It was so influential that many people changed majors for their sophomore year based on this experience.”

Bart stayed true to his professional photography ambitions. After graduating he got his first job with a commercial photographer in New York City. “I loved every minute of it even though it was long hours and minimal pay,” says Bart. “But it made me a pro and I developed friendships with people that I still talk to today.”

After five years working with the commercial photographer Bart decided to open a photo studio in Manhattan. Like many budding business owners, Bart knew more about photography than running his own firm.”

As Bart broadened his client base, the diversity of products and people came with the evolution. One such client was former Pratt classmate Charles Krypell. Bart has done a number of product shots and photo shoots for the well-known jewelry designer. This relationship helped foster Bart’s interest in doing jewelry and gem product shots.

Bart learned valuable lessons early on. Using props to photograph gems and jewelry isn’t always the best option. These objects tend to distract from the jewelry item’s inherent beauty, which is why many jewelry product shots are of a solitary piece on a neutral background. Jewelry items such as bracelets, necklaces and earrings (to a lesser extent) can be photographed on a flat surface. But rings have an inherent dimensional quality to them which is diminished when photographed on a flat surface.

Photographers are known to use everything from putty to wax to position rings upright for imaging. But for Bart, “The hot glue gun is one of the best inventions of the 20th Century,” says Bart. 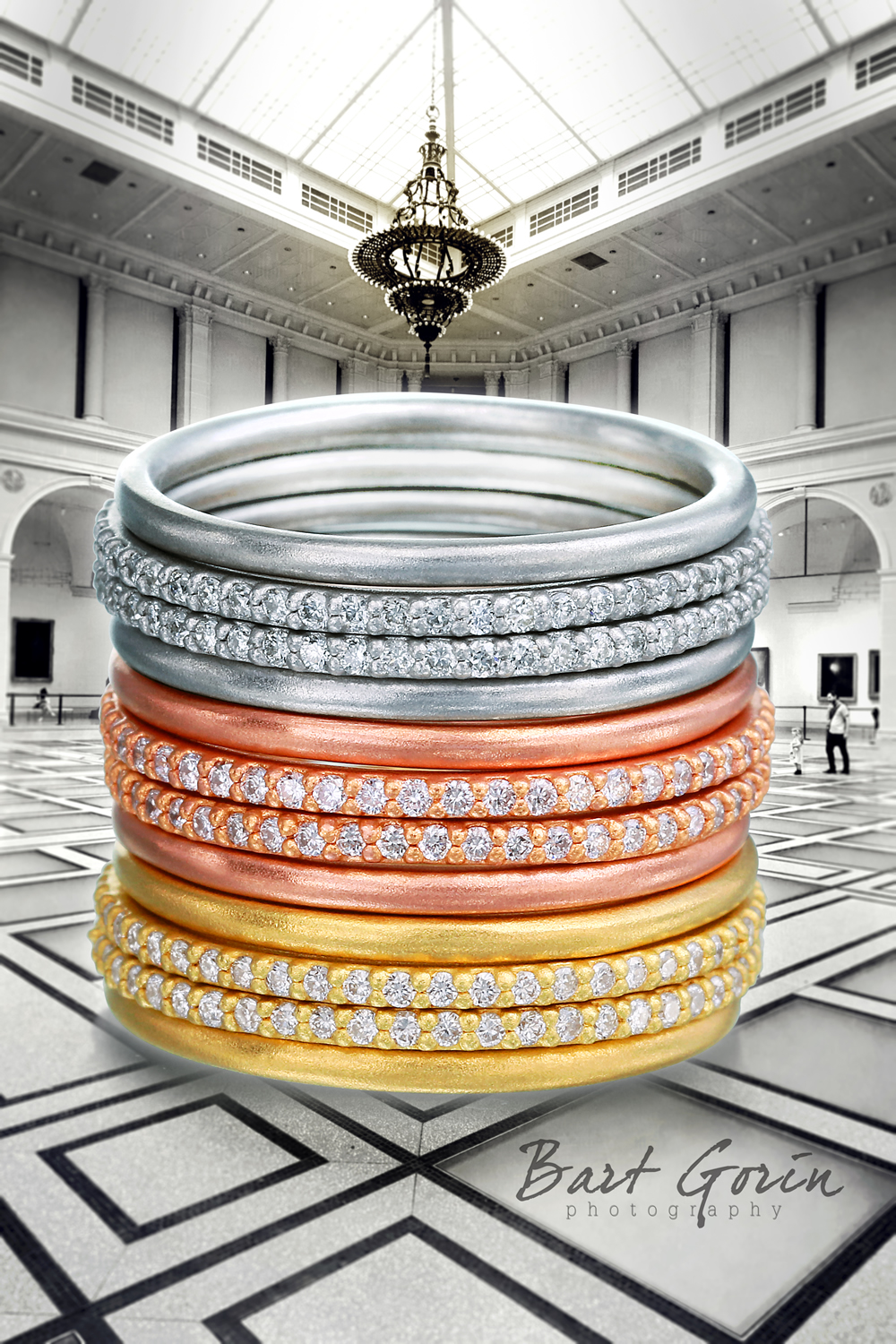 Today’s mobile phones have impressive optics, but many jewelers will attest that professionally photographed product shots can make all the difference in their marketing platforms.

Having captured images of a range of jewelry items and gemstones, even Bart admits there are tricks to getting such product shots right.

Hammered and textured surfaces are less intimidating than reflective high polish surfaces. Bart finds properly photographing gemstones challenging, especially mother-of-pearl, sliced diamonds and opal.
Eye-catching jewelry and gemstones product shots aren’t easy by any stretch, but there is a place for non-professional quality images, that’s social media websites – especially Facebook. Today’s mobile devices can produce some amazing clear and sharp images with fantastic resolution. Taking product shots of new inventory at the store or collections of interest at a trade show can create interest and excitement of new arrivals from customers, which is paramount to get them in the store.

But don’t let the immediacy of a marketing message diminish the quality of the jewelry item being showcased on social media websites. Bart has some helpful hints. “A lot of jewelers like to showcase new rings on the person with the best hands in the store,” says Bart. “That’s a good start but make sure the items are showcased in natural light coming in from large windows or the lights over the showcases where this jewelry is displayed. And, don’t smother the viewer with too many ring choices in a single image.”

And, when shooting still shots of many products create a seamless backdrop using a large piece of construction paper in neutral-colors (light gray, beige or tan). Use visual merchandising staples such as risers, platforms and forms to photograph one or groups of items. Again, good lighting is critical. Empty a display case and use the mainly bright LEDs to capture good jewelry product shots for social media.

Pinterest and Instagram are another story. Many brides to be get their engagement ring and wedding band inspirations from these websites. Factor other new media outlets plus traditional media, and professionally produced images definitely have their place in a jeweler’s marketing mix.

“Professional photographers are worth it because the photos look better and can even have an emotional impact,” says Bart. “It might sound corny but a good photo can be your best salesman, you don’t get a second chance to make a first impression.”